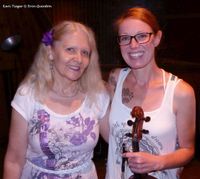 Kari Tieger, Beth DeSombre, and a third performer To Be Determined, will alternate 35 minute sets of original music to fill the evening.  The Brooklyn is a great listening room, so come on down!

Celebrating Valentine's Day in May, The Eclectic Quartet (Kari on keys and vocal, Erin Quinton Erban on viola, Jon Patrick Brennan on bass, and Ron Schmitt on percussion, with backing vocals by Sara Bartel) will perform many of Kari's love songs in English and French.

Members and friends of the Alliance will also share their poetry.  These sweet offerings will be accompanied by wine and pastries.

Songwriters Kari Tieger and Wayne Cabral will each do a set of original music, and they will collaborate on a couple of songs together.  There may even be a couple of surprise guests.  Don't miss this great evening!

Primarily a solo performer, Kari is a keyboard/vocalist, and her music is an eclectic blend of adult contemporary pop with world, classical, jazz, and New Age influences. Her debut solo CD Touch of Magic (TIGER SOUND) in 1998 was followed in 2001 by En français, s il te plait (In French, If You Please), a collection of songs, poetry and instrumentals inspired by her love of the French language and culture. For both projects she drew together many talented musicians to create a diverse and engaging sound.

Next in 2004 Kari released the minimalist five-song CD Pas de Deux, recorded in Paris that summer, as a preview of her 2008 release, Nos Mots (Our Words), which was subsequently voted Motif Magazine's 2009 Album of the Year. In 2007 she put out Zazen, in collaboration with a French Buddhist monk.  Then followed the full-length ILLUMINATION in 2014 and the 3-song Valentine EP in 2017.  And Kari's most recent 2019 release, Touch of Magic Revisited, took an updated look at her freshman album 21 years later, remixed and remastered with digital audio technology.

Working with many fine instrumentalists, Kari continues to develop original material for future release. With fellow composer Kevin Campbell, she transcribes, co-arranges, and records on many of his songs, and has served as his co-producer in the studio, since 1995. Kari also teaches piano and encourages her many students to compose.

A member of ASCAP since 1989 (recipient of numerous popular songwriting awards), the Rhode Island Songwriters Association (RISA) since 1991, and Just Plain Folks online since its inception in the late 90s, Kari has made appearances on RI cable television (Just Plain Folk, Artists/RI, The Don Lincoln Show, Center Stage, Merry Meet Rede) and performs at New England festivals and area coffeehouses.